ARCHIVE OF STATE OF FLORENCE: AUDITORIUM 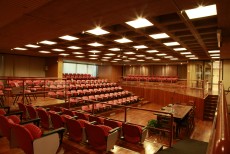 The Auditorium located in the basement of the building? reachable through a short staircase, or with elevators,? equipped with audio / video system for multimedia presentations, complete with any digital recording, with adjoining room for aperitifs or buffets. The Auditorium? particularly suitable for hosting conferences and seminars, press conferences, events, concerts, product presentations, etc. Capacity: up to 100 people seated Access for disabled people both in the auditorium and at the speakers' table. Room in front of the auditorium set up with: 1 Reception desk for the secretary 1 showcase - Dimensions 2.00x 60x H.169 2 clothes rack on wheels 1 storage room with electric socket In the Auditorium: 1 illuminated glass bulletproof board - Dimensions 160x110xH. 110 - internal space to display 89x148xH.26. AUDIOVISUAL INSTRUMENTS DIGITAL RECORDING SYSTEM 2 MICROPHONES with wire and 1 wire-less SCREEN fixed 150 x 180 Remote controlled ceiling video projector DVD and VHS reader Laptop PC For temporary rental of these spaces contact: dr. Fabio Dangelo Phone: +39 055 26320238 Fax: 055/2341159 E-mail: fabio.dangelo@beniculturali.it http://www.archiviodistato.firenze.it HOW ARCHIVE THE ARCHIVE Founded in 1852 by the Grand Duke Leopold II of Tuscany - as central archives of the grand-ducal state it was housed in the great palace of the Uffizi, of which it occupied the first floor and the ground floor of both wings. That venue for? as historic as it is very prestigious, already in half? of the twentieth century begin? to be insufficient, given the large amount? of archival documentation which was paid to the Institute. Following the flood of 1966, the proposal to move to a more central location suitable, it appeared mature and was identified as suitable the area of Piazza Beccaria, at the eastern edge of the pi? ancient historical center. The initial project dates back to the early 70s and was carried out by the Italo Gamberini Studio in Florence. Work began in 1977 and the building was then inaugurated on 4 February 1989. Italo Gamberini, yes? tested with an urban structure that, due to its particular destination, had necessarily to have the characteristics of a closed container, but, at the same time, open to the needs of a highly qualified user. The problem was solved by adopting a trapezoidal volumetric solution: having established a longitudinal axis between Piazza Beccaria and Viale Duca degli Abruzzi, a long internal crossing road was planned leading from the west side to the main facade overlooking Piazza Beccaria. This long corridor, illuminated from above and used as an exhibition space, takes on the connotation of an ideal internal road connecting the building to the city. The palace ? been considered an example of contemporary architecture and as such? has been? by the competent Superintendency of Architectural Heritage. Currently the State Archive of Florence, preserves more? of 600 funds, for a total of over 80 Km of documents, from the VIII sec. in our days, of the pi? different typologies: correspondence, diplomas, illuminated codes, statutes, drawings, nautical and geographical maps which bear the historical memory of the political, social, cultural and artistic events of Florence and Tuscany and which make the Florence State Archive a point of reference for researchers all over the world. FOR EXHIBITION ROOMS HOW TO REACH US: CAR From HIGHWAY A1: Exit "Firenze Sud" + Viale Europa + Viali di Circonvallazione + P.za Beccaria From HIGHWAY A11: Exit "Firenze Peretola" + Viale Guidoni + Fortezza + P.za Libert? + P.za Beccaria PARKING: P.za Beccaria and Murate Area (on payment) RAILWAY Florence - Santa Maria Novella Station (EuroStar, IC trains) Florence Station - Campo di Marte (Regional trains) BUS - From Florence - Santa Maria Novella Station : ATAF 14 - 31 - 32 - 33 - A - From P.za del Duomo: ATAF 14 - From P.za della Repubblica: ATAF A - From P.za S.Marco: ATAF 6 - 31 - 32 - 33 - From National Library: ATAF 12 - From Florence Station - Campo di Marte: ATAF 13 - From Fortezza da Basso / P.za Libert ?: ATAF 8? 8