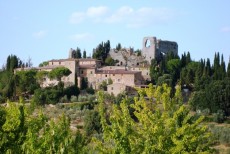 In the province of Siena, between the Crete Senesi and the Val di Chiana, there is a small medieval village with the ruins of an ancient castle:? MONTELIFRE ?? The origins date back to the beginning of the year 1000, to be taken over by the Martinozzi family, who still owns it, in 1348; it was Agnolo and Betto di Martinozzo who bought it from the noble Tolomei family. In 1527 on the occasion of the war between the Lordship of Florence and the Republic of Siena, the fortress placed at the border of these two territories, became by its owner, a nest of conspirators against the Republic of Siena and refuge for rebels and exiles. Because of us the Sienese troops, taking advantage of a momentary victory over the Florentine Signoria and after a long siege, obtained the surrender of the fortress, undermining the impregnable walls from its foundations, reducing it to the ruins in which it still stands today. Today the ancient village, inhabited only by the owners,? It has been transformed into a simple but welcoming and restful holiday center, the only legally authorized tourist reception center. www.montelifrehouse.com