STATE ARCHIVE OF MILAN: THE COURTYARDS 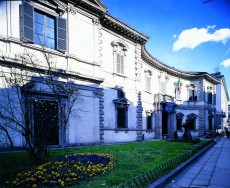 HOW THE PALAZZO DEL SENATO WAS BORN, LOCATION OF THE STATE ARCHIVE OF MILAN The Palazzo del Senato in its modern architecture? the fruit of a remarkable series of historical overlaps, starting in the 16th century with the construction of the Helvetic College, which took place on the ruins of an ancient monastery of the Umiliate nuns. The College, founded for the formation to the Catholic religion of the Swiss seminarians,? It was designed by some of the greatest architects of the seventeenth century, Francesco Maria Richini, author of the main faÃ§ade, Girolamo Quadrio and Fabio Mangone, who built the courtyards. At the end of the eighteenth century the Palazzo became property? of the State and transformation and expansion works are started to make it the seat of offices of the Public Administration, on projects by Giuseppe Piermarini and Marcellino Segr ?. In age? Napoleonic the College is modified on the plans drawn up by Luigi Canonica for the transformation of the Palace in the center of the Senate Consultant of the Reign of Italy, from which the actual denomination of PALAZZO DEL SENATO. In 1886 the ancient Collegio Elvetico became permanently and exclusively the seat of the State Archive. Th? the Palace from the 18th century? appreciated for the magnificent interior portico (which) serves as an embellishment to the City ?? factories of this nature, and magnificent, ... serve to adorn the City? ??. Thus, in a letter of 1780, Carlo Firmian, plenipotentiary minister, describes with admiration to the Austrian government in Vienna, the courtyards of the Palace. At the end of the nineteenth century, the Palazzo del Senato is included in the lists of the "monumental buildings"? of national interest and still today? inserted in the guides to the historical Palaces of Milan as a magnificent example of the Lombard Baroque. The Senate building currently? headquarters of the State Archive of Milan. THE COURTYARDS The Palazzo del Senato? always appreciated for its two courtyards, framed by a large and suggestive arcade. 1? courtyard - Measurements: 40 mx 30 m - Colonnade on four sides, consisting of 56 columns (12 columns on each of the 2 short sides, 16 on each of the 2 long sides) 2? courtyard - Measurements: 32 mx 28 m - Colonnade on three sides, consisting of 42 columns (12 columns on the first short side, 2 on the second short side, 14 on each of the 2 long sides) --------- -------------------------------------------------- -------------------------------------------------- ---- HOW TO REACH US The Senate Palace? located in Via Senato 10, a few minutes from Piazza Duomo. By underground lines - Line 1, S. Babila stop - Line 3, Turati stop With buses 94, 61 From Linate airport by bus 73 (to the terminus of Piazza S. Babila). For those arriving from the Central Station the pi? direct? subway line 3 (Turati stop) Those arriving from the motorway network must follow the signs for the Centro, inner ring road and then ask for directions to Corso Venezia (Piazza S. Babila) or to Piazza Cavour. For temporary rental of courtyards, contact: - Responsible: Isidoro Volpe? isidoro.volpe@beniculturali.it - Collaborator: Francesca Zara - francesca.zara@beniculturali.it